Our question for the week contained two fun facts about lampreys: the death of a member of the royal family and their disappearance in otter poop. Three species of lamprey occur in freshwater ecosystems in Wales: the Brook Lamprey (Lampetra planeri), the River Lamprey (Lampetra fluviatilis), and the Sea Lamprey (Petromyzon marinus). This week’s #FishInThePost focuses on the river lamprey. Congratulations to Gareth Williams for correctly guessing this week’s #FishInThePost over on Twitter!

This week’s #FishInThePost by Sayali Pawar- A River Lamprey showing its feeding skills!

Lampreys are one of the most primitive vertebrates and have existed in virtually the same form for 360 million years. River lampreys are small, eel-like fish known for their toothed, funnel like sucker-mouths. Their jawless mouth is their greatest asset as they use the sucker to attach to other fish and feed on its bodily fluids. Their teeth point backwards and help the fish stay attached to its prey. They also use their raspy tongues to create a hole in their prey. The lamprey’s tongue has tiny sharp structures, which scrape away the prey’s scales. The lamprey produces an anticoagulant, which prevents the blood of its prey from clotting allowing the parasitic fish to consume its victim’s blood and scales quickly and efficiently (Barras 2015). They also feed on carrion (the decaying flesh of dead fish) –an important, but under discussed, service to our freshwater ecosystems.

Lampreys blood-sucking strategies have even been the theme of a 2014 horror movie: Blood Lake! In this film, the starved and blood-hungry lampreys move on from consuming fish populations to humans. It is important to clarify that only eighteen of the thirty-eight known species of lampreys are parasitic. Non-parasitic lampreys live off a store of nutrition from when they were in larvae form, filtering water through their gills and feeding on the microscopic particles of matter in the water (Lee 2017).

Despite their Hollywood status, River Lamprey alongside other fishes like the Atlantic Salmon and Arctic Charr are priority species, in the United Kingdom, meaning that they are species that require conservation action under the UK Biodiversity Action Plan (JNCC n.d.). Instream infrastructure such as dams, weirs, and even road culverts can negatively affect river lampreys’ abilities to migrate up rivers to their essential life-stage specific habitats, and to spawn. Fishways located at different built infrastructure and designed for other species, such as salmonids, are not well suited to river lampreys. This is because lampreys employ a method of intermittent locomotion; swimming rapidly for a period and then using their mouth to attach to structures and rest (Quintella et al. 2004; Kemp et al. 2011). Kerr et al. (2015) argue for development of fishway options better suited to river lampreys. Specifically, using studded ‘lamprey tiles’ has been found to improve the passage efficiency for lamprey (Vowles et al. 2017). The good news is that the removal of barriers, such as weirs and the improvement of water quality has helped the river lamprey to return to and reclaim its river places, and flourish in UK waters (Smith 2015).

Are we busy blocking lamprey from their spawning habitats, because one killed a royal family member? No, not exactly, rather King Henry I loved eating lampreys and reportedly died in 1135 after indulging in this hearty meal. King Henry I most likely died of food poisoning but this historic myth has shaped the lamprey into a legendary UK fish species (Green 2006). Many cultures still consume lampreys today and Queen Elizabeth’s II coronation pie was made of lampreys in 1953. If any of our readers want to try this delicious dish here are a few important preparation/safety tips (the mucus and serum of River Lamprey are toxic). 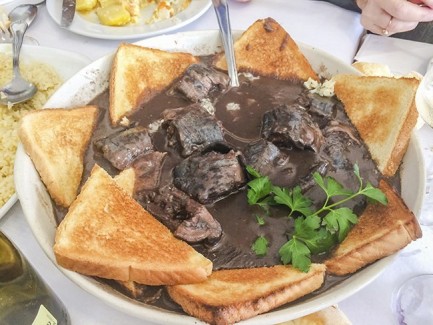 A hearty meal of Lamprey Bordelaise, lamprey cooked in wine sauce with the fish’s blood added in (Credit: Lee 2017).

Thank you for reading our fifth edition of #FishInThePost. Our next two posts on the blog will be focused on the Twitter game #DamOrNot and answering questions that followers have recently shared. #FishInThePost returns in 2019!

Barras, C. (2015, November 02). Earth – Meet a lamprey. Your ancestors looked just like it. Retrieved from http://www.bbc.co.uk/earth/story/20151102-meet-a-lamprey-your-ancestors-looked-just-like-it

Green, J. A. (2005). Henry I: King of England and Duke of Normandy. Cambridge University Press.