This past week, Steph and I conducted our first river walk along the River Tawe! The walk started from the Swansea barrage (at the river mouth) continued to the river’s source and back to the barrage. This was the first of many river walks that we will be conducting along the Tawe throughout our research journey. We will be conducting these river walks seasonally. The goal of this first river walk was to follow the river, using cycle and foot paths, and to pay ethnographic attention to the humans and more-than-humans alongside and within the Tawe, and reflect on our own research relationships with the riverscape. Some examples of more-than-human beings along the Tawe include dogs, birds, plants, and insects. 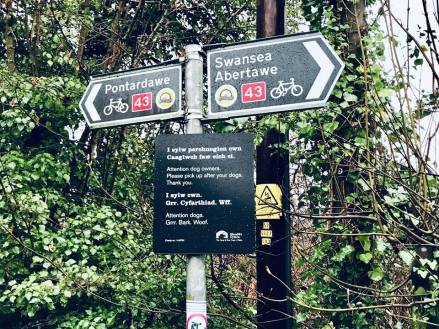 Day 1- Great start to fieldwork walking along the River Tawe! We walked from Swansea to Pontardawe!

River walks form an important part of our qualitative research at the FIRE lab, building on works by mobilities scholars (see Bissell 2016; Lorimer 2010), feminist geographers (Heddon & Turner 2012), and ethnographers (see Jones & Evans 2012; Pink 2015) who explore how the embodied act of walking offers ways to think critically about sense of place, landscapes, and environmental knowledges and values. Through walking, Steph and I paid attention to our own as well as others’ encounters and relations occurring around the river. Our approach was grounded, allowing this first pilot study to shape and guide how we approach our research now and in coming years. We recorded our initial observations, sketches, and dialogue with people we met along the trail, and used cameras to capture the riverscape -above and below the water. 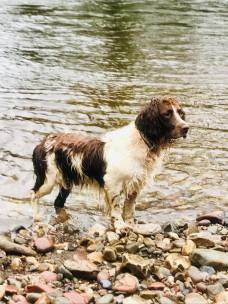 Day 2- Great second day of fieldwork along the River Tawe to Ystradgynlais. Many dogs, great encounters with humans and more-than-humans, and lots of rain!

A key text which informs our river walks methodology is “Walking methodologies in a more-than-human world: WalkingLab.” Authors Truman and Springgay (2017) suggest that using walking as a research methodology and method is useful in paying attention to four main themes: Place, multiple senses, embodiment, and rhythm. I draw on these four themes to reflect on our first Tawe walk.

Place– Place is a key fascination for Human Geographers and other social scientists. Tim Cresswell (2015) argues that space become place through everyday encounters-when a space is used and lived in. Rivers such as the Tawe, support humans and nature daily – shaped by their past, constrained, re-shaped for the present, and moving into the future. Rivers are ever-emergent places, and they hold a diverse range of meanings for the people who interact with them. Through walking along the river, we were able to consider and observe place-making activities (e.g. birds carrying nesting materials, eggs laid in ponds, signs for different pathways) along the Tawe, as well as considering how place-making is produced through the act of walking.

Multiple Senses– In the FIRE lab we have recently been discussing how to move beyond the visual to explore how our other senses allow us to experience river places. Through river walks, Steph and I were able to explore the diverse sensory experiences of the Tawe— the sounds of the river, the feel of the rain, the friction of our feet against the mud, the changing coldness of the air, and the various smells of the river.

Embodiment– Walking as a process connects the mind, body, and environment. As Steph and I moved along the Tawe river, we were able to experience the river through our bodies. We were able to hear the sounds of the water, immerse ourselves in the sociality of sharing our thoughts with each other, and think in motion— our thoughts constant like the flow of the river. (My body ended up crashing from illness after we had reached Craig Y Nos, and I had to return to Swansea to heal).

Rhythm- During our walks we considered the flows of the river, humans, and more-than-humans we encountered and engaged with. Rhythm will change seasonally with the weather, with place, and with our own being. We explored changes in flow as we, the cycle path, and the river, crossed into communities. We explored the flows of everyday life— the areas (such as parks and river access points) where people gathered and noted other areas where we would infrequently see other people. 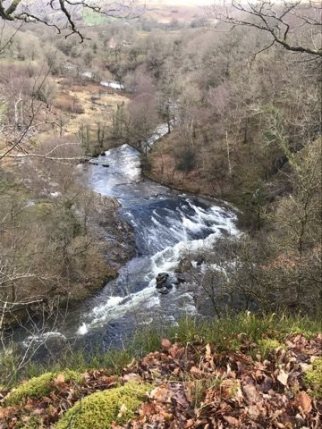 Our first river walk was significant in that it allowed us to get to know places, humans, and more than humans along the River Tawe. We were able to observe and participate in place-making activities along the river. We now have a deeper understanding of how to engage with river users throughout our research project exploring people’s connections to and knowledge of freshwater ecosystems in South Wales. Stay tuned for more seasonal river walks along the River Tawe, with a short walk with Emily O’Gorman in April!